Sometimes you need to audit or profile your Java application. The easiest but most intrusive way to do this is to do a bunch of System.out.printlns (which is obviously bad) or to use loggers. After adding a lot of logging statements, your application becomes cluttered with unnecessary boilerplate code.

Profiling, instrumentation or method measuring are great examples of cross-cutting concerns that might be nicely solved using AOP (Aspect Oriented Programming.) Basically, it allows you to invoke a certain action upon some defined conditions without the need for changing the instrumented code. The process of applying the aspects to your code is called weaving.

There are three types of weaving (not every AOP implementation must support all of them):

As a side note, you can create your own simple runtime weaving AOP tool by using Java Agents that are invoked before any other written source code method (in the matter of fact, agent methods are invoked even before the static void main(String[] args) method of your Java class.)

The big advantage of runtime weaving is that you are not forced to recompile the source code you want to instrument nor to have to stop it. You can just plug into already executed application and start monitoring it right away.

How Can I Use it?

Firstly, you need to execute your Java application that you want to monitor (well, there is a way to start an application and tracing at the same time, but you’ll need to read details on the BTrace website.) BTrace can be used in one of three ways:

I’ll focus on the third option, as in my opinion it seems to be the easiest and fastest. Nevertheless, one command that might be very useful for you despite the chosen method is the jps. It allows you to show what Java processes are currently running. The PID showed in the output will be useful in some of the further commands.

Source Code to be Instrumented

At Github you can find an exemplary application that will be instrumented by the BTrace and discussed in the rest of this article. The source code should be pretty straightforward. The purpose of this application is very simple – it is supposed to simulate a cache access. The whole application consists of three classes:

Take a look at the DataAccessor’s cache – it’s stored in:

The weak references are good for caching purposes as they are eligible for collecting by GC despite the fact they are still accessible from the map instance.

Note that the WeakHashMap wouldn’t be a good candidate for this purpose as it makes a weak references to the map keys, not values in which we’re interested in.

If you want to learn more about strong, soft, weak and phantom references please refer to Ethan Nicholas’s article.

Below you can find an exemplary BTrace script that will be used to instrument the previously presented source code / cache access. Some of the information is provided in the comments to the script code. You can create and edit the BTrace script in your IDE – just be sure that you have btrace-boot.jar on your classpath to be able to use the annotations like @OnMethod, @Property and so on.

Beware that you are not allowed to use any non-BTrace methods nor to create new objects within the BTrace methods. The point is to guarantee that the script is read-only and as non-intrusive as possible, therefore you are not allowed to do e.g. String concatenations. You must use only methods from the BTraceUtils class that can provide you e.g. mentioned string concatenation, comparisons, aggregation, parsing methods, etc.

All information about different probes locations as well as the requirements for the BTrace script methods and fields can be found here, so I won’t duplicate it.

However, I’ll try to explain what does the @OnMethod really do as it was quite unclear for me when I was writing the script.

Basically, all @OnMethod annotations define places where probes should be applied to the source code. The @Location allows you to further narrow the probe location. So:

means that when the control will return from the DataAccessor#getData(-) method’s body, the probe will be activated (body of the addMethodDuration method will be invoked.)
The Kind.Return is required when you want to use @Duration annotated argument. It’s quite reasonable – if you want to know how long did the method body take, you need to probe just before the return statement.

means that we want to set a probe in any method within the DataAccessor class (clazz and method attributes) but we’re interested only in dependent methods entry events (location.)

means that we want to set a probe in DataAccessor#getData(-) method (clazz and method attributes) but the probe will be activated only upon instantiation of the Data objects within this method (location.)

Ways of Getting the Results

There are a couple of ways to get the results back from your probes. You can either:

I personally like the third option the most because it allows me to easily view the value of the variable from the VisualVM as well as show plotted historical values of it.

The first option, however, is the fastest as you can see the results on your screen just after you hit the “Start” button.

If the application you will instrument is already running, you can run the VisualVM ($JAVA_HOME/bin/jvisualvm on the linux boxes) and find your application on the left hand side list. Double click it to inspect it (if you have never used the VisualVM – it’s a good time to see what information about running processes it provides.)
At this moment, the BTrace tab might not be visible as you probably need to install the appropriate plugin. Just go to Tools->Plugins->Available Plugins and install the BTrace one.

Now if you once again open your application in VisualVM, the BTrace tab might still not be visible. If so, then you need to RMB click the application on the left hand side list and select “Trace application…” option as shown below:

The BTrace tab should be shown – choose it and you can type your BTrace script directly on the shown form. Just hit “Start” and your script will be weaved into the selected application.
Personally, I’d advise you to use the Open... button and select the BTrace script on your disk. In this way, every time you’ll edit the script source file, click “Trace application…” and proceed to the BTrace tab, the actual version of your script will be loaded.

If you’ve selected my exemplary application to be instrument and the provided BTrace script provided, just hit the “Start” button and the monitoring will start. You should see a bunch of information in the output window (“entry points” and “cache hits” messages) as shown in the below screenshot: 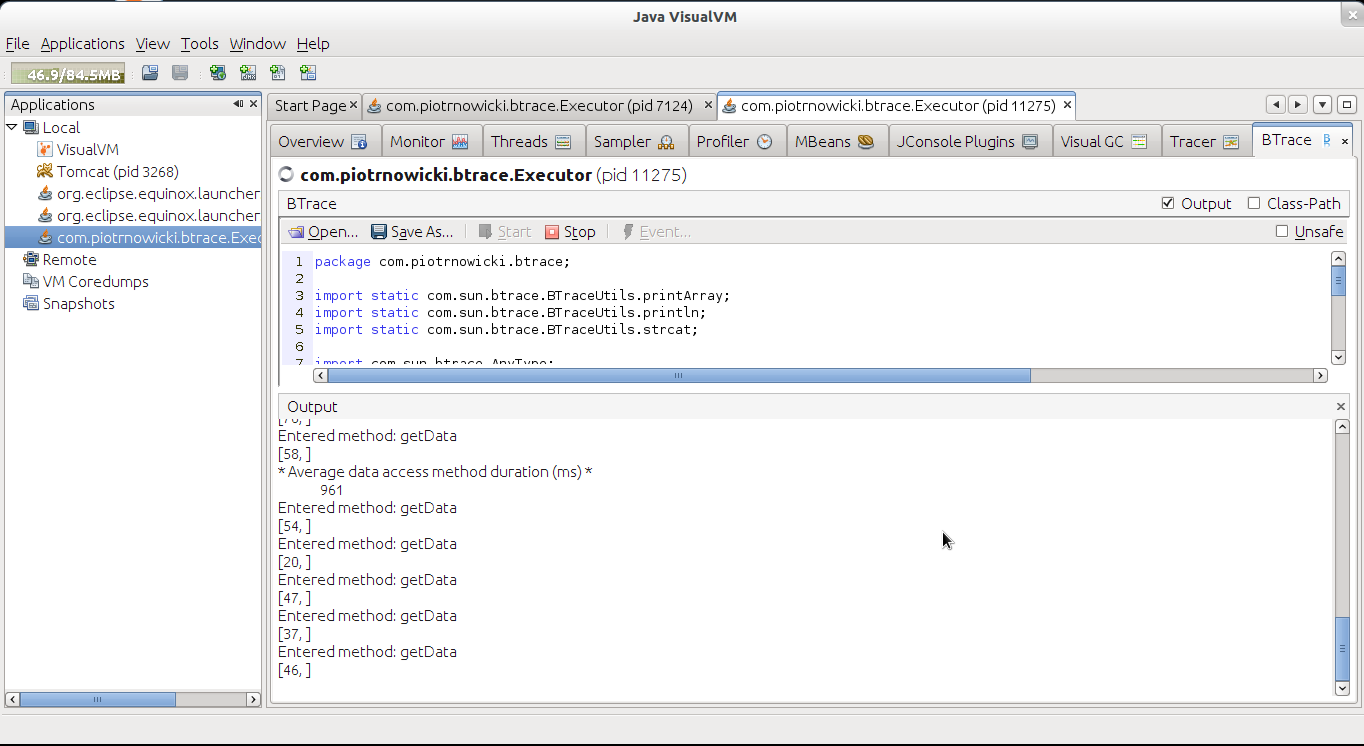 Note that one of the probe actions gathers the duration of the method execution and aggregates it using Aggregation class. I’m using the aggregated values in a AVERAGE mode, so every 10 seconds, it’s printing the average method duration on the screen.

Besides the console output, you can observe the probe results of three other variables. One of them, dataAccessed, is exported as a jstat counter and can be accessed from a command line. For the provided example, type jps and locate your monitored application PID. Then type:

Of course replacing the 14207 with the PID you’ve read from the previous command. The -Djstat.showUnsupported=true is required to show your own defined counters.
Note that the name of the counter is not just the fully qualified name of the field – it’s prefixed with the btrace.

There is another way you can access the counter:

which will show you all counters for a given PID. You can further narrow the results using regular shell commands, e.g.:

There are also two fields that are accessible through the MBeans server. Simply click on the MBeans tab in the VisualVM and expand the com.piotrnowicki.btrace.MyClass. You should see two properties: dataCreated and cacheChecked. After double-clicking on the value you can see a timeline – a historical values of the counter value plotted on the graph.
If you’ve executed my source code and BTrace script, try to inspect the dataCreated value. You should see something like on the screen below: 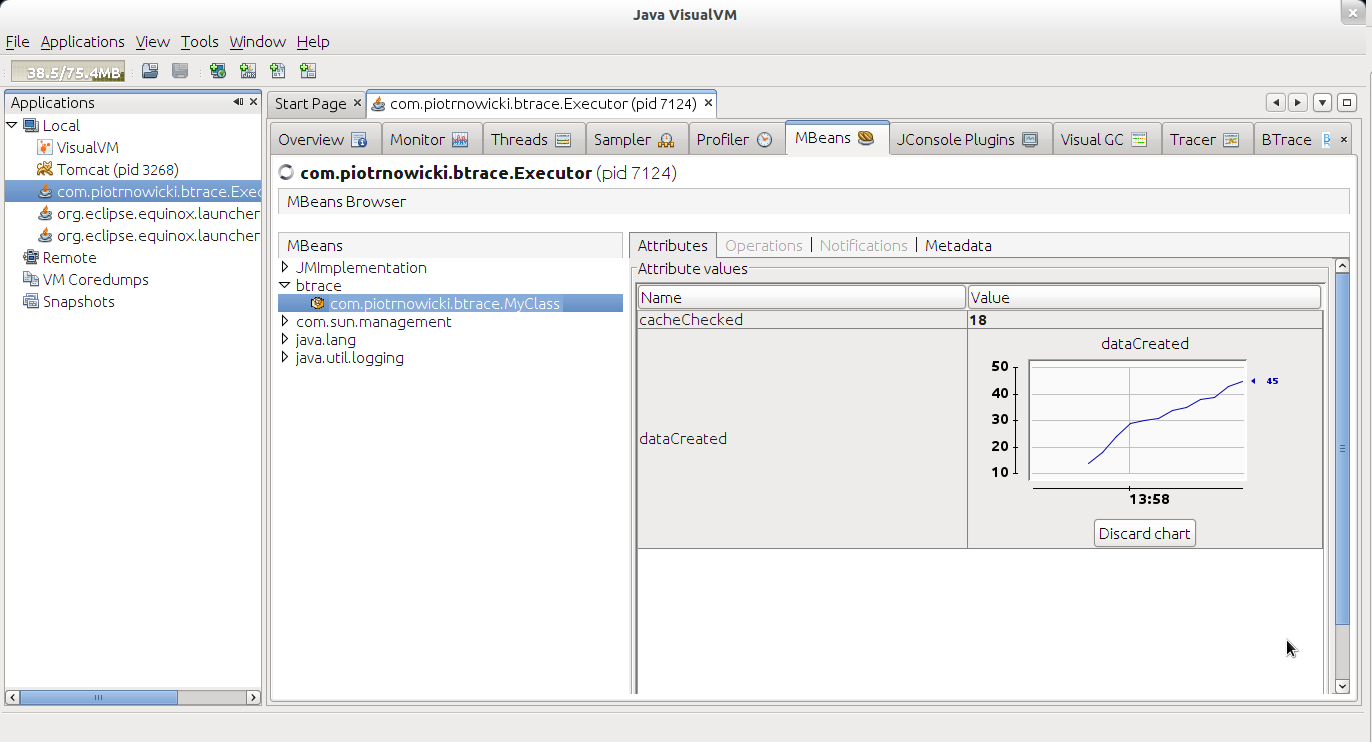 So, basically, the above counter is not measuring cache hits but cache misses (every cache miss is followed by instantiation of the Data object and its insertion to the cache.)
After some time, we should have more and more hits to the cache, therefore less data should be created. You might expect that the Y axis value will finally get to the 100 and stay there till the application ends.

It’s true, but only if we’d use strong references. In the exemplary code I’ve used WeakReferences as discussed before. This means that we can observe more than 100 objects created, because after some time, the GC decides to move in and clear some of all our Data instances. It happens because they’re referenced only from the single point of the process and this only reference is weak.

This is what you can observe on the following screenshot: 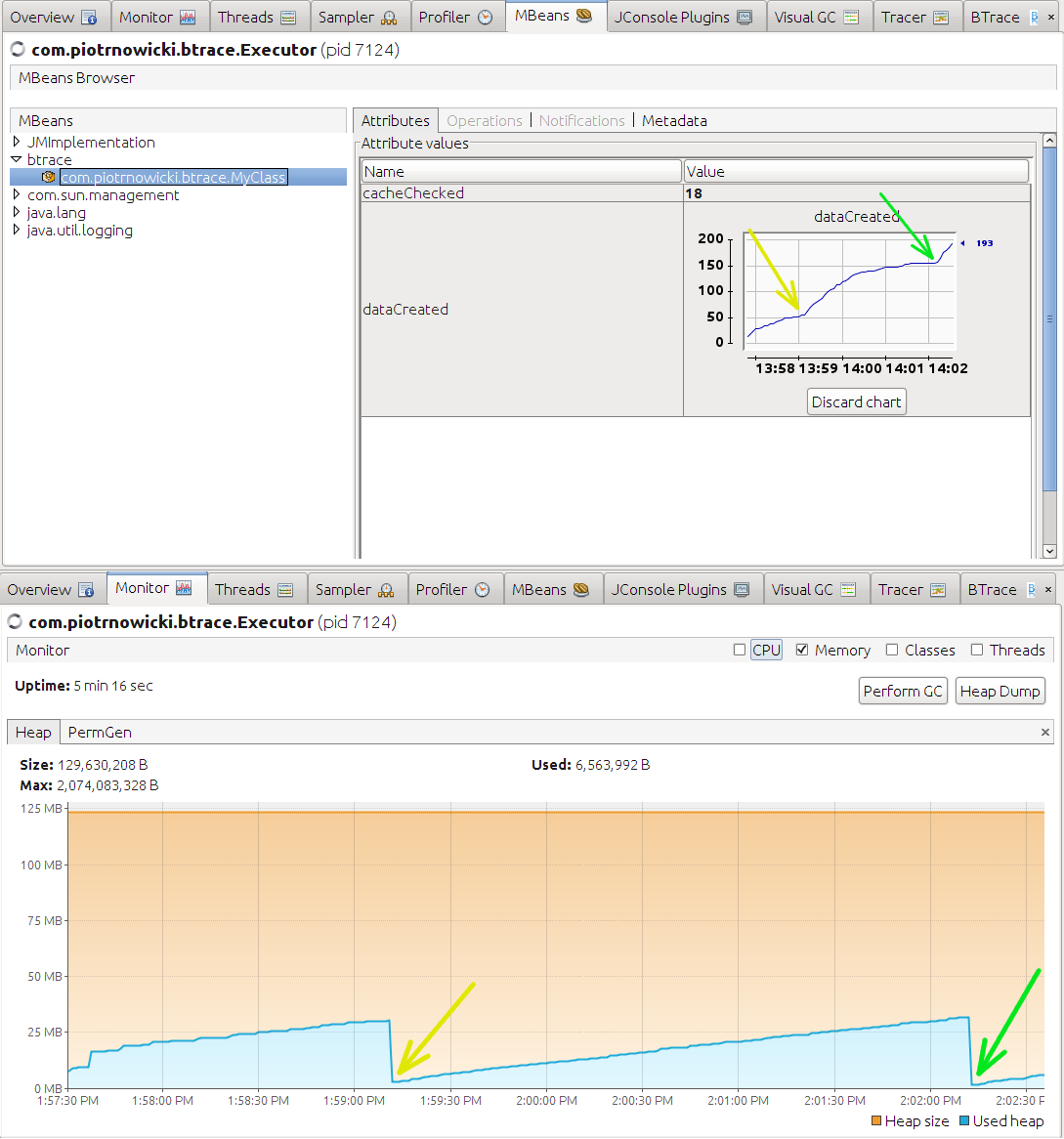 Notice the point where the value of dataCreated is fairly constant; it means that almost no new Data is created, so we have many cache hits. Take a look at the memory consumption at the same point of time.

When the GC is cleaning up the memory, Data instances are garbage collected and we need to refill our cache (so we need to create a new Data objects). At the same point of time, we’ve got huge increase of dataCreated value.
You don’t have to wait for automatic GC but you can try hitting the “Perform GC” button in the “Monitor” tab to send a request for GC to be executed.

Now, if we try to change the WeakReference to the strong reference and adjust the code so it works on Data instead of WeakReference<data> the results will look like this: 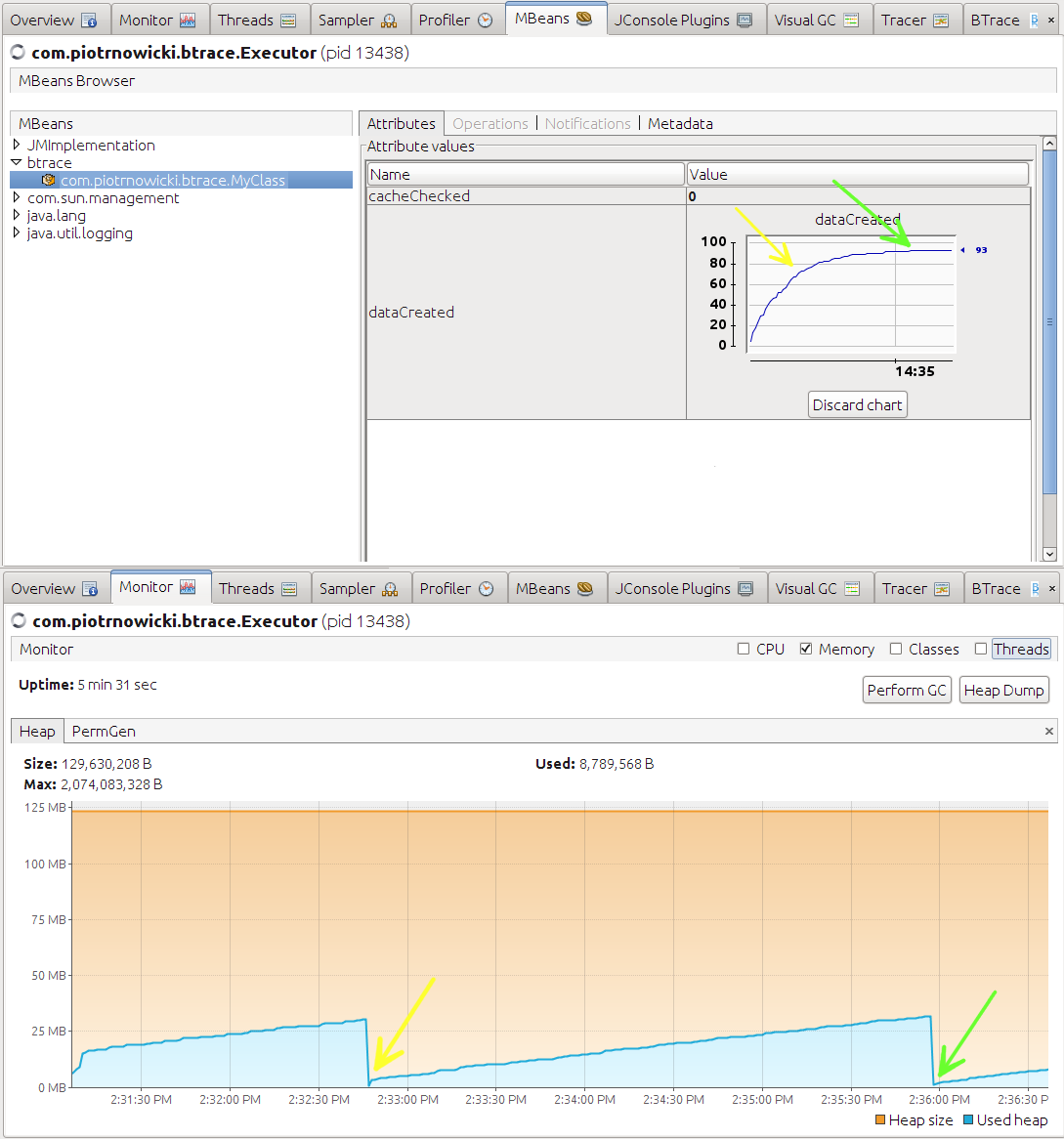 Note that we’re trying to reach a 100 created Data objects and we’re not going any further than this number. We’ve got many cache hits and this time, we’re not affected by the Garbage Collector actions (but they do occur as you can see in the graph.)

Don’t take the cacheChecked value under consideration at this point. This property is probed only when weak references are used.

The overhead of BTrace script should be minimal and that is one of the most important part of the project. It should be as non-intrusive and safe as possible. However, if you’re using e.g. the @Property annotation, you need to access the MBeans server so this is some additional overhead.

If you use massive print statements, string concatenations, aggregations in your probe actions – it also doesn’t come without a cost. Notice that there is also an “Unsafe” checkbox in the BTrace tab. If you check it, you’re all by yourself and there are many ways you can harm the performance and yourself.

The BTrace seems to be nice, fast and easy way to access and instrument your running Java application. It doesn’t require you to use any special tools – you can monitor every process on the JVM and thanks to the VisualVM plugin – you can change the script on-the-fly.

It’s not the ultimate tool for Java monitoring. You might as well use other solutions already built in in your servlet container (like psi-probe) or application server (like SpringSource Insight).

Nevertheless, it’s a nice, low-level solution for monitoring any running Java application and it doesn’t require your source code to be executed in any specialized environment.